A great life takes courage and action. But you all know that already.

Maybe not the type of courage soldiers have on the battlefield when the bullets are flying. Of course, most of us will never be in that situation.

Besides, it's more courageous to question a battlefield anyway.  Real heroes were the people of the 1960's protesting the Vietnam War and the slavery of the draft.

Today the system must keep enough people stupidly patriotic and economically deprived to fill the ranks. Patriotism by killing someone you are told to kill does not seem right to me.

Forget the history books and the murderous wars started by madmen. What kind of a decent person starts a war anyway? I'm not angry at the soldiers. Most are just simple guys who don't know what else to do.

The problem is that the men who are not so simple will rise up through the ranks to be in charge of the killing. These are the people we need to worry about. We do not have to worry about the ordinary soldiers. They just do what they're told.  We can just as easily tell them not to kill, as to kill.  They do not have to be hired killers, they can do something else.  Something of real value.

It's best if you just avoid all this stupid nonsense of military service.  There is no draft, so there is no reason to join.

The real problem a large enough segment of the military that enjoys  killing and they rise up the ranks to be in charge deciding who needs to be killed.  They make killers out of the simple guys, sending some home in a box and the rest as a shell.  Then have the rest of us pay for the madness.

How Courage and Action Applies to You

But for now, let's think about your life today.

What qualities or attributes do you need to make your life better?

You need courage and action to do anything of value that is outside of your comfort zone or familiar zone or the rut you're in or maybe the stagnant, abusive miserable life you're in.

You need courage and action to talk to a new woman. Maybe liquid courage.  That's alright. Use enough alcohol to get you started until you can approach women without it. Maybe you just need to decide that you are a great man and you deserve to spend time with a great woman or women.

You need courage and action to apply for, interview and get hired at a new job. Certainly it takes a fair bit of courage to quit a job or quit most anything that is not working for you.  Action is needed too.

It takes courage and action to leave a person behind.  Even a person who is no good for you. Staying in a dysfunctional relationship is the easy way of dealing with it. The courageous way is to leave.

It takes courage to expend the massive effort required to make huge changes in your life.

You may need to question all your old choices.

It took massive courage and action, for our forefathers to come here. They did not let a huge, dangerous ocean stand in the way of their dreams. They took action.

The Courage to Live Consciously

How many of these fears are holding you back? How would you live if you had no fear at all? You’d still have your intelligence and common sense to safely navigate around any real dangers, but without feeling the emotion of fear, would you be more willing to take risks, especially when the worst case wouldn’t actually hurt you at all? Would you speak up more often, talk to more strangers, ask for more sales, dive headlong into those ambitious projects you’ve been dreaming about? What if you even learned to enjoy the things you currently fear? What kind of difference would that make in your life?

You can do the same. You do not have to face a dirty, insect and rat infested, crowded, smelly hull of a ship for months on end. Your troubles you need to work through may not be that bad.

Or they may be worse.

You may be in a violent relationship that is seconds away from death. Use those seconds to leave. You may be on the brink of making a decision that may haunt you for the rest of your life.

These massive changes and questions will severely change how you look at things. It takes courage to look at something differently than you used to and that everyone around you looks at things.

The way to become more bold is to consciously make choices that improve your life in the direction you want it to go. You decide what it is that you want to do and then you take steps toward that. Action, and sometimes massive action is the key. 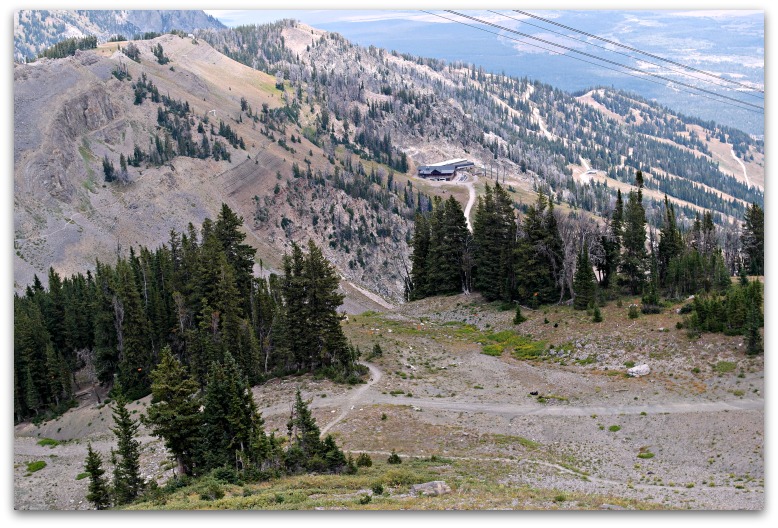 It took a lot of courage and action for me to hike down this trail. The drop off's were thousands of feet. This was way beyond my comfort zone.

Think of it the opposite way. How will you ever lose weight by continuing to eat way too much junk food and never exercising? How will you meet a woman or more women if you do not do the approaching? How will you get a job, or a different job or a better job is you do not get busy with the steps necessary? How do you start a business, or plan a trip or have some fun? How do you clean your house, get organized or do anything else of value without the time and effort?

How do you leave an abusive wife?

You do not do any of those things without courage and action.