How to Have an Easy Productive Life

There is a common factor between people who have an easy productive life, free time and get things done.

The people who experience the most abundance and have the highest measures of happiness do not have a lot of stuff.

When your life is overwhelmed with stuff, either physical belongings or emotional baggage, something has to give. Your life will not be right. You will suffer in some way.

You just cannot hope to have a productive, stress-free, good life with a lot of stuff.

The easiest way to quickly make improvements to your life is to throw stuff out. Whenever I seem to be bogged down and not getting things done in the manner that I want, I find something to throw away. It makes me feel better and gives me more space to actually do what I want to do.

Even people who seem to be productive who have a lot of stuff, but, if you look deeper you will see that they have had to give up important things in order to be this way.

These are the people who have to work so hard to keep on top of all their stuff. The stuff controls them.

One of my favorite clutter free experts is Don Aslett.

I have quite a few of his books.

My ex-wife had a lot of stuff. She tried to stay on top of it by continually working at it and on it. I bought her a 2,400 square foot ranch house eight years ago. The basement was absolutely packed with stuff. I left her almost 8 years ago and in all that time she still hasn't gotten a job. She took care of the kids and her stuff for awhile, but she cannot take care of herself because of being overwhelmed with her stuff.

I think the excessive stuff is a symptom of her mental illness.

My brother's ex-wife has a lot of stuff. He bought a nice trailer in a beautiful area for her to live with his daughter. The place is totally overrun with her stuff. She doesn't seem to be able to do anything about it.

Stuff will overwhelm you if you let it.

I don't say to throw it away for others. I say to do it for yourself. Screw others.

Being clutter free is the ultimate in modeling positive behavior.

Look at other people who have an easy productive life and you will see that they start by living in a clutter free environment.

The act of throwing out massive amounts of stuff is one of the most empowering feelings in the world.

There are a few things that give you great short term results.

But all these feelings are fleeting. They do not last.

Ah, but tossing out stuff never gets old. It always feels good. It can be done forever. You can roll around in your wheelchair from room to garbage can. It will feel as good when you are 100 as it does now, probably better.

There is nothing as sad as an old person living in a mountain of clutter. Barely able to survive with all that stuff. The stuff makes you older than you are. A crotchety old curmudgeon, more interested in stuff than life. It makes a person older than they are, it really does. 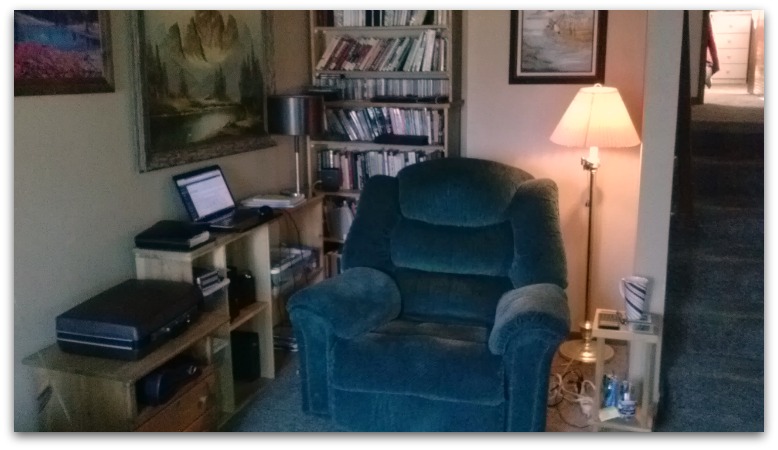 My cozy home office corner from a few years ago. Note the lack of stuff. I have recently even pruned this amount down.

A Happier Man › Why Get Organized › Easy Productive Life