When you stop doing things that are not good for you, you open up more time and space for what you truly want.

You develop time to actually do good things for yourself.

Most men are force fed a steady diet of the wrong ideas and spend all their lives running ridiculously fast on a treadmill to nowhere.

I certainly wasted most of my life doing this.  And even though I now fully realize the error of my ways, there is not a simple way to correct it.

The mistakes have been made and they were huge mistakes.  It takes enormous effort to correct huge mistakes.  You might not be able to correct some.  Years of self-afflicted abuse like smoking, drug use, daily heavy drinking and overeating come to mind.

I am thankful my vice is overeating.  Cutting back on the food is simpler than stopping smoking or drugging.  Although overeating is a difficult habit to stop.  You need to eat no matter what.  Drugs, smoking and drinking are totally unnecessary.

But there are other bad habits that you get into that are not even a vice.  Just wrong choices that compound your dissatisfaction over time.

Getting out of the wrong marriage, wrong city, wrong college major, wrong career, wrong job and bad family situation all take enormous amounts of persistent, focused intense effort that you may not be willing or able to expend.

These burdens can seem impossible to shed if you view them as most people do.

The trick is to view them with the eyes, or mindset, of how a man intent on his own happiness would view it.  To a man like that, these are serious problems to deal with, but you would view it as a challenge that you can overcome with time and effort.

Your life is worth this effort.  Isn't it?

Having Beliefs that Do Not Serve You

This is huge, because if your mind is not right, you will not be right.

That is why I focus so much on the first step of my 3 step system - getting your mind right.

This type of stupid belief has doomed millions, maybe billions of people to untold, unspeakable suffering, pain and death.  This type of belief, forced on us from above, is a belief that does not serve you...only them.  If you and I are poor sinners, unworthy and insignificant specks, what are they?  Aren't they the same?  Why do kings, emperors, pharaohs, holy people, high level celebrities, athletes, businessmen and politicians get to rule over us?

Isn't their propaganda just a method to keep us down?

Bending Over Backwards for Other People

Capable men can get a lot done.  So other people tend to sit back and let you handle everything.  It's satisfying to be a super producer, well-organized, on-top-of-everything type of guy...up to a point.  If you are doing all this to make YOUR life great, fine.  But most of you don't.  Most of you have to be such a can-do person to take care of dysfunctional, under-performing and lazy others in your life.

Think of how much better the world would be if everyone was doing their share.

I used to work extremely hard for a wife.

Now I work hard for me.  I help the people close to me...but not that much or that frequently.  I give my kids a hand.  I take care of a few of their bills.  I counsel them.  I encourage them.  I guide them.

But I do not bend over backwards for them.

I let them create their own lives at their own pace at their own schedule.  I believe this is one of the major reasons they are thriving.

The benefit to me is that I can live a far simpler, easier life, focusing on my needs.  And they can do the same.

Many men have nowhere near this.  Always bending over backwards for their wives and children.  Further encouraging the people around them to become more and more helpless instead of more capable.

Continuing to Do Things You Do Not Want To Do

I am right in the middle of doing something I do not want to do. But instead of wallowing in it and being full of self-pity, I am extremely active in working my way out of it.

I spent far too much of my precious time doing things I did not want to do. Days, weeks, months and years.  What a g..d... waste.

Now, when I recognize I've made a mistake, instead of riding out the mistake for years, I am trying to correct it as soon as I can.

Being Overly Busy With a Lack of Time to Think

A lack of time to think is linked to continuing to do things you do not want to do and bending over backwards for others.

You need plenty of time to sleep and to sit around in comfort.  Continual over-work and continual discomfort will ruin your health and your creativity.

Plus, it just sucks in general.

Usually you can combine your relaxation with thinking.  Do some of both.  Or alternate.  The big thing is carving out large chunks of free time for you.

Not Taking Care of Yourself

All these other problems manifest in you not taking care of yourself.  Lack of sleep.  Eating the wrong foods.  Eating too much.  Overdoing the bad vices.

Men are famous for running themselves into an early grave with over work, tending to everyone else and ignoring their own health.

This mostly stems from you not thinking you matter.

Taking Advice From the Wrong People

Oh boy.  Sometimes you can go really wrong here.  I have tended to do this from time to time and have suffered.  No one else can get inside of your mind and know what is best for you.

It's good to inform your closest people of what you are thinking about to get some of their counsel.  But unless they are in the know about what you are trying to do, it would be best to listen more to yourself.

Taking What Someone Else Gives Rather Than What You Want

I've found that the more I let someone else decide something about me, the worse my life has become.

It's almost to the point, that if someone wants to give me something fairly large that I did not go after, I should just automatically refuse.

Chasing Money Instead of Life

Happier Man Habits from Others

I think a lot of what has gone wrong in my life has been a result of allowing an influential person to direct me into something I did not really want to do.  Then once I finally discovered what the problem was, because this person had such a hold on me, it was difficult to walk away.

Once you stop wasting your life with bad habits and the wrong mindset you open up your time and life for maximum happiness and the abundant type of life that goes with it. 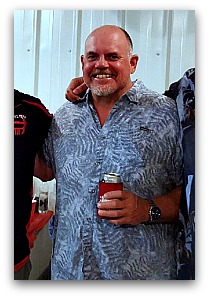 Me, relaxed, having fun at a party with some of my best friends. My happier man habits include partying with good friends

I'm serious about the most important happier man habits being to plan your life and write it out.