Living your life more like a happier redneck will make you more free.

Redneck is defined as:  A working-class white person, especially a politically reactionary one from a rural area.

I define it differently:  A thinking, non-easily fooled, person who believes in his abilities and will do what it takes to live a good life.

Protecting yourself is obviously, the most important freedom. If you are dead, you are not free. If you live somewhere where guns are outlawed you either have to keep your guns hidden and unknown or move.

It is no coincidence that the places that have the highest ratio of gun ownership are the safest. If you are a criminal who would you rather rob, a house with no guns or a house that may have guns? It seems like such a stupid question because the answer is so obvious.

But there are plenty of foolish, know nothing do-gooder's who believe in taking your guns that you need to be vigilant.  People like that are forever getting into your business, apologizing for the intrusions of the state and telling you that "they" know best. If you want freedom and happiness you need to ignore them.

Happier Redneck and Self Protection

Happier rednecks prefer to give an intruder a face full of lead and a shallow grave in their backyard rather than waiting for the cops to show up the next day to bury him.

Happier rednecks also prefer to seek their own vengeance on those who would hurt him or his family. That is the code of the free person. I know it sounds backwoods and redneck, but that is why backwoods people and part time rednecks are more free than most and happier in their freedom.

Rednecks have the the belligerent attitude to be

The best part of having the happier redneck attitude like this is that you will probably never need to act on it. You will live your life in a way to protect yourself against these types of bad situations that would force you to act out the necessary violence.

You will not have to hunt down and kill the priest that molested your son years ago because you would have had enough common sense to never let your son be with a priest or spend much time with anyone except those you trust. You would have avoided excessive church for the most part because your life and what you want from it is more important than blindly obeying.

You will not have to drag a teenage boy from his bed and beat him to a pulp for raping your daughter because you will have raised your daughter so she would never get near anyone who would do such a thing.

You will not have to steal to feed your family because you would be working to take care of them and stockpiling food and water to tide you over in difficult times.

You will not have to get involved in shady dealings because you will have dealt honestly with people and your work.

You will not worry about the authorities taking everything from you because you will have made it extremely difficult for them to do that.  Plus, you find a happier life has no need for massive amounts of money that someone is tempted to steal or confiscate anyway. 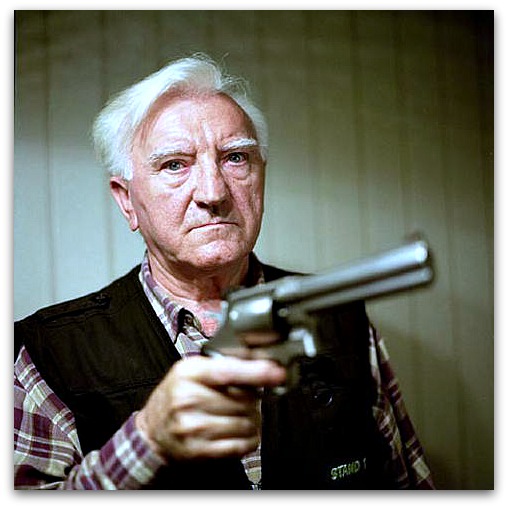 Everyone can protect themselves

You will not have to obtain guns illegally when you already have obtained them and plenty of ammunition already.

I know that this sounds like a country song about backwoods rednecks. But these types of songs sing of true methods of keeping your freedom. That is why country music is so popular in certain parts of the country and so hated  in others.

I am encouraging you to do what I do and be a happier redneck and protect yourself.

This might be termed a redneck rising.  Happier rednecks get it.  If you want a good life, you are going to have to take it.

Hank Williams Jr. Lyrics to "A Country Boy Can Survive"

I live back in the woods, you see
A woman and the kids, and the dogs, and me
I got a shotgun, a rifle, and a 4-wheel drive
And a country boy can survive
Country folks can survive

I can plow a field all day long
I can catch catfish from dusk 'til dawn
We make our own whiskey and our own smoke, too
Ain't too many things these ole boys can't do
We grow good ole tomatoes and homemade wine
And a country boy can survive
Country folks can survive

We came from the West Virginia coal mines
And the Rocky Mountains and the and the western skies
And we can skin a buck; we can run a trotline
And a country boy can survive
Country folks can survive

I had a good friend in New York City
He never called me by my name, just hillbilly
My grandpa taught me how to live off the land
And his taught him to be a businessman
He used to send me pictures of the Broadway nights
And I'd send him some homemade wine

We're from North California and south Alabama
And little towns all around this land
And we can skin a buck; we can run a trotline
And a country boy can survive
Country folks can survive