It is critically important to organize your keys by minimizing the number of keys you need and keeping track of them as if your life depends on it.  Your life does depend on your most important possessions.

Misplacing your keys is at least extremely frustrating, producing maximum anxiety.  This is just a stupid thing people keep doing to themselves.

I hate those big dangling chains and key rings. I do not want extra stuff in my pocket. I keep my keys on just two small key rings.

Everyone who has those big key chains cannot keep their keys in their pocket. Then they are continually misplacing their keys. I do not need that type of worry.

﻿Here is how I keep my keys

I do have extra keys for my home, my car, my son's car and other things. But I do not carry these keys around with me. I keep them hidden in my house in case I need them. 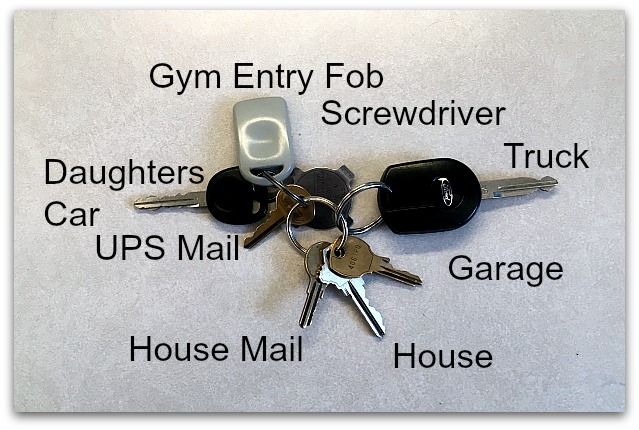 Organize your keys like mine. Just the keys I need, the screwdriver, gym entry fob and a couple of key chains to take up as little room in my pocket as possible

I had 2 dorm roommates my freshmen year at UW-Platteville.   Hal, was a big fun-loving guy from Verona. Hal had gone to school in Madison for 2 years and was kicked out for poor grades. He was very smart but he loved to go out drinking more than study.   His parents thought going to a small school away from his old friends and the nightlife in party town Madison would help his grades.

Steve was from my hometown. We had gone grown up together and he was one of my best friends. Steve had gone into the military during the summer after we graduated from high school and our freshmen year of college. His military training definitely changed him from high school.

All 50 guys on the floor used a common bathroom. You would take your all your toiletries back and forth to the bathroom.

Early in the first semester I was on the way to the shower and told Steve to leave our door unlocked because I was not taking my keys.  You can probably guess what happens when you do something this stupid.

I took my shower, got ready and when I got back to my room the door was locked.

I couldn’t believe it.

I had told him to leave the door unlocked.

I was standing with a towel around my waist with my toiletries in my hand furious with Steve and wondering what I was going to do. I had no idea when Steve or Hal was coming back. Hal sometimes went home during the week because he did not live very far away and Steve had his military stuff to do that sometimes took many hours.

I waited around by my door for long time when finally, by some miracle Bill, the dorm Resident Assistant (R.A.) came home. He started laughing when he saw me standing in my towel. “So the new freshmen got locked out of his room. I bet you want me to let you in."

I learned the hard way to always have my keys.

What Happens When You Don't Organize Your Keys

I just heard 2 stories about losing keys. Both were in winter while the guys were shoveling snow or snow blowing. They each lost them in the snow.

The men placed their keys in their winter coat pockets rather than in their pants pockets. Pockets in winter coats are large and roomy. They are good for hats and gloves but not keys. They worked strenuously and did not concentrating on their keys and the keys fell out of their coat pockets.

I always put my keys in my pants pocket. Coat pockets aren’t built for keys.

One of my husband's first jobs when we moved into our house was to replace the torn screen on our patio door. He replaced the screen while I was gone, and I'm sure it must have looked nice. But after putting his tools away in the garage, he realized he'd locked himself out. So what does my handyman husband do? He slits the new screen to reach the screen lock door.

My husband learned two things that day: how to replace a screen and to always leave a door unlocked when you're working around the house.

Just keep your keys in your pocket when you are out of the house.  You're begging to be locked out.

From the New York Times

How to Find Your Missing Keys

Alternative Way to Organize Your Keys

Some people only carry their car remote in their pocket. They then keep all their keys in their glove box.

It sounds like an interesting way to be minimize the number of keys to carry around.

Easily Organize Your Keys with the Handiest Type of Key Ring

This is the type of key ring I recommend.  It's strong, holds a lot keys and does not take up much room in your pocket.

The reason people lose their keys is using the ridiculously large key chains and not being able to slip their keys into their pocket where they belong.

Always know where your keys are.  They should have just a very few dedicated locations.  My dedicated locations are in my right hand pants pocket, a special bowl in my bedroom and displayed prominently on a table if I am away from home.

A Happier Man › Why Get Organized › Organize Your Keys