Settling Down is Stupid

Settling down is stupid.  I made this mistake and have suffered massive problems because of it.

Everyone is so intent on you settling down, getting married, having kids, buying a house and spending massive amounts of money on everyone else, doing everything for everyone but you.

That is settling down.

There is no rule or law that says you have to settle down anyway.

You have to obey certain rules and laws to stay on the good side of the law.  Getting married is not a law...yet.

A man who cares about his life and his happiness will not take fall into line with the constant stream of propaganda shoved down his throat his entire life.

Of course, you cannot avoid all this constant stream of nonsense.  It's everywhere, every day, all the time.  Most of us cannot stand this withering assault and cave in to it.

I did.  I married.  I had the kids before I could afford them.  I bought the too expensive home for mt income.  I got in extreme debt.  I had enormous bills to juggle.  I worked like a fool trying to pay for it all. 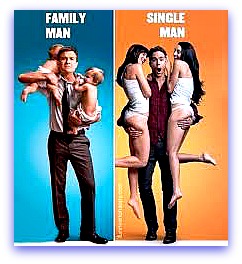 I tolerated my wife's non-stop verbal abuse barrage questioning everything I did or said and criticizing my every move.

I put up with never ending foolishness from her, trying to keep momma happy.

I did this for years until I was obese, pale, unhealthy, ugly, broke, depressed and suicidal.

I tolerated this stupid mess I was in until I could take it no more and left her.

Settling down is stupid.  It was for me.  I would never settle down again.  It is too fun being wild and free.  I can do what I want, when I want, with who I want.

Settling down is settling for one woman, endless chores, a tiny bank account, dealing with drama, chaos, massive bills, never ending problems, little to no fun and no future.

Settling Down is Stupid

No One Needs to Settle Down

Single Isn't Sad
In Spite of Continual Pressure to Marry

Being single isn't sad.  Single men have created everything good in the world.

It's the young, single man's hard work and brain power that has made this modern, civilized world we all enjoy.

Our rulers (a very tiny sliver of extremely powerful old men) know this so they always need a plan on how to keep the young single men under control.

But the way you start to have a good life is by thinking for yourself and questioning all of societies narratives and conventions.

A Happier Man › Be More Masculine › Settling Down is Stupid