One of my old friends died from hard drinking.

We did not grow up together or go to school together like my best friends.  He was not even near my age.  Not even close.  Maybe more than 30 years older than me.

He was older than my father and the polar opposite of my dad.

There is never going to be a better man to me than my dad.  But I did need to learn other types of things from other men.  What to do, what not to do, working, drinking, women and life.

He died a number of years ago, from the accumulated effects of hard drinking.

Why does a man drink himself into oblivion night after night and year after year, for decades?  What is the cause?  What is the trigger?

How I Met My Hard  Drinking Friend

I got a summer job working for the small town Department of Public Works where I grew up right after I graduated high school.  It was a 5 day a week, 40 hour a week job that I kind of enjoyed, except for having to start early in the morning, 5 days a week, and stay there every day for 8 hours.  I certainly made use of the money to improve the quality of my life and for college.

One of the workers was an older man who quickly befriended me.  He was late 40's at the time, divorced and with a young son who would visit him occasionally.

His main job was to mow the grass at all the lands the City owned.  There were parks, pools, grassy land around the sewage plant, water plant and vacant land.  He had a great big riding lawn mower and I had a smaller riding lawn mower.  So we would ride our lawn mowers all around town to all these locations and mow the grass.

Kind of an easy job and fun.  Of course I only made minimum wage and he did not make much more.

The other workers always wanted me to help them with their hard labor jobs like shoveling, or concrete work.   I was young, big and strong, and they wanted me to do the heavy lifting.  But my friend insisted that I stay with him, to help get in front of the grass, he said.  He told me - "I don't want those other guys usurping me."

He did care about how the grass looked.  He had pride.

But the Real Story was His Personality related to Hard Drinking

He was a hard drinking, hell raising kind of a guy.  The kind of guy who love to hunt, fish, trap shoot and drink.  The kind of a guy who rarely spent a night at home, when he could spend them at a bar.  He smoked cigarettes, he chewed Copenhagen, he swore...a lot, he told dirty jokes and was obscene.

Most mornings his routine was the same.  He would slowly shuffle bleary eyed and hungover across the parking lot into the dirty little break room next to the shop, grunting when the guys said  - morning.  He would dip a handful of Copenhagen into his mouth, light a cigarette, and fill a dirty cup with coffee.

Then he'd stagger over to a chair and plop down, sitting slumped over in the chair staring at the floor, smoking a cigarette, drinking coffee through the Copenhagen as our supervisor told us the main tasks that needed to get done that day.

The double nicotine and coffee would usually pep up my friend by the end of our bosses talk, and he would direct a number of rude or obscene comments at the other City workers lounging in the break room before they had to hustle off to their tasks.  Maybe a slight at one of the guys lack of sexual ability or the ugliness of someones wife.  He might brag about his own sexual prowess or shooting ability.

Sometimes one of the workers would say they saw some especially hot woman prancing about our small town in something revealing.  He would crack an enormous smile as he would brag about what he would do to her.

Maybe he would have some advice for the boss on dealing with some complaints from a particularly bothersome citizen who was insisting that we keep coming back to fix some perceived problem.  His advice on that, of course, could not be used.

Sometimes he would have a comment about how he was so busy with the grass and how he needed me the rest of the week to keep up with it, if someone hinted that I should help them, rather than him.

I grew up fast, hearing things I had never heard before.

He was a real character.  A lot of people looked down on him as just an old hard drinking drunk who did not know anything.  They would see him at the local bars late in the evening, too drunk too stand and slurring his words.

But he was kind, respectful and decent to me.

Not in a fatherly way.  But in a good old uncle sort of a way.  I loved him as a friend and was jolted to hear of his passing.

I hear the old stories about him.  His drunkenness.  His stubbornness.  His seeming inability to live in a normal way, continuing his hard drinking until the end.

He was kind to me.  He told me things.  I loved to listen to his stories, his jokes.  He had a way about him that was so different to me.  I had to grow up fast around him and his hard drinking ways.  The stories he told shaped me to this day.

He was a bull of a guy.  Not that tall but muscular, powerful.  His back was wide, his neck was thick (and red), his arms were huge and his belly was massive.

He could work hard, but preferred to loaf.  He is no different than millions of employees world wide.  We all like to loaf.  But he had mastered it.

Why He Drank So Hard

You know I am not against drinking.

I love drinking beer and party a little when I can.

But I am against anyone ruining their life by whatever means.  Drugs, overwork, food or bad people.  And daily heavy drinking will ruin your life.

Why does a man drink so much and so often?

My friend was a Vietnam veteran and I cannot help but think that his life was ruined by the Vietnam War just as it ruined so many other men's lives.

His drinking was a coping mechanism.  He was trying to outdrink the pain.

He never said much about the horrors he saw.  He was too tough and too proud.  But thinking back he had a sadness in his eyes.

He may have seen things and done things in the war that caused the sadness and the pain.  The Vietnam War was the tragedy of that generation.

We Have Not Learned

I spent about 7 years discussing these types of issues with my son.  I told him I would support him on anything he did.  The only thing I did not want him to do was join the military.

This is the tragedy of this generation.

The soldiers come back from Afghanistan and Iraq after killing innocents and they cannot cope.

This generation cannot drink enough to deal with the stupidity our leaders have inflicted on us. It is nearly impossible to drink as much as you need to deal with the horror you have caused.  It's too expensive.

You just cannot go willingly into the military thinking everything is going to be ok.  When things are wrong, they are not going to be right.  It will never be OK to kill others.

You are either going to die, or get maimed or be a killer.  The chances of things being fine for you are very small.

That is why you cannot join.  You have to avoid this.

You do not want to put that gun in your mouth and pull the trigger.

The problem with the US is the wars.  It has always been the wars and it will always be the wars.  Until you have no wars, it will never be right.

The best you can do is keep a little to the side of the madness by not joining in.

When you have to brainwash and train young men to be killers, they are killers.

But my friend was not a killer.  He was as kind and decent to me as any man on this planet has ever been.  There are only a few men I have been blessed with, my father being the main one, who I consider to be of that caliber.

He was a hard drinking drunk, no doubt.  He was a lazy worker.  He was profane.  He was obscene.  But he was kind and gentle to me.  He was a joke around guy who I miss to this day.

Why did he have to go to a war half way around the world and do who knows what to some innocents chumps just like him.

I believe he turned that rage back on himself.  Medicating the pain away with heavy drinking.  Trying to forget and trying to cope. 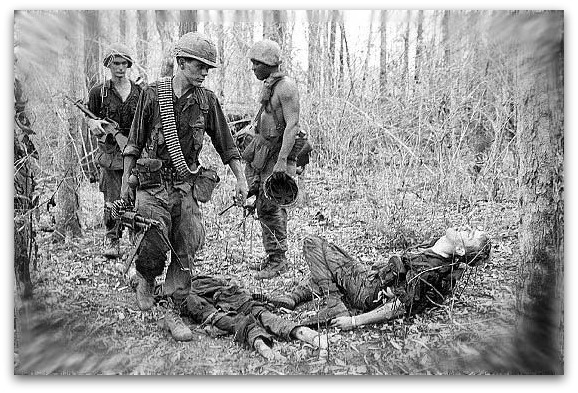 You know men who saw this. Probably the most messed up men you know.

But he was not a killer, just a small town boy.  A muscular football player.  He should have spent his early 20's playing football, or going to school, or working, or drinking a little beer, or chasing women, or joking around with the guys.  He should have been helping his parents around the house.

Not participating in the slaughter. 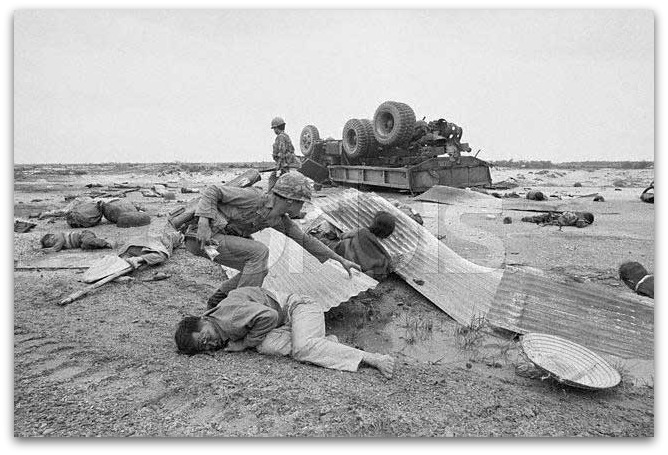 How does anyone involved in this not have to spend the rest of his life finding a way to cope with drugs and hard drinking.

He should not have been in Vietnam killing innocents and ruining the rest of his life with the pain of all this.

This was a proud man.  He was not going to confide in an 18 year old boy about the horror he saw and participated in.

He is not going to tell me how many people he killed or who he saw killed.

He chose hard drinking.  And he spent the rest of his life doing just that.  A short,  painful life filled with excessive, daily hard drinking.

I wish I could see him now and let him tell me.  I wish he could unburden his soul of the pain.

I would do that for any friend.

But it is too late for him.

But it is not for you.  You can avoid military service.  You can live in peace and let others do the same.

Instead of my old friend, quietly enjoying his retirement, hunting, fishing, spending time with his kids and grandchildren and enjoying a few beers now and then, he is buried from an extremely hard drinking lifestyle.  He drank his way to spend his elderly years with the misery of excessive alcohol related health problems and an early grave.